This text is published in the book « The case for subtle ar(t)chitecture » by the Editions HYX.

Multisensory and multidimensional perception of ar(t)chitecture

Not all architecture is intended to be ar(t)chitecture but should try, as far as possible to move in this direction.

However simple, architecture should always contain an element of surprise. It should allow for the movement of those strolling through its different spaces (nspaces). Architecture is not something that is viewed solely from a stationary perspective (the eye of the photographer) but is also observed from a flowing movement (change of reference point).

In the text that follows, the architecture that we shall be talking about will be presumed to be static in a specific place. We shall, therefore, not be considering the case of moving architecture.

Movement can only exist in relation to a fixed point of reference.

The reference point selected is that of an observer, at a point we shall call O.

The architecture is in movement because in each of its different dimensions (and their various permutations) it can present different images of itself, different selves.

An environment is always considered to be in movement because it is constantly changing (light, wind). Climate is one of the main causes of this type of multi-sensory change.

The rate of movement of observers in time is always identical, even if their perception of time may vary depending on the person and the place. By contrast, the rate at which observers move in nspaces differs. So the perception of architecture in movement in nspace will vary from one person to another.

This means that today, when creating a building, allowance must be made for the (multi-sensory) perception of an observer who may be either stationary or moving in one or several of « n » dimensions, either inside or outside the building.

It also means that any representation of actual architecture via an image or an object is even more approximate than in the past, for images or objects cannot, in particular, show all the different flows possible in the various dimensions, the connections to real and/or virtual networks, the observer’s outside perception of movement in each of these flows …

Architecture in movement is neither geometrical (simple space or geometric form created by man) nor organic (in the Wrightian sense of the term). It is both these things and more in a permanent relationship with the environment that existed when it was created and with all its component parts (flows, etc.).

Today’s architecture must incorporate complex movements if it is to push back (or reinforce) the limits it can have with and for other urban « players », or, as Rem Koolhaas would say, if it is to be superimposed on and blend in with the existing context to create a hybrid whole, never static, always moving rather than just a mere juxtaposition of crystallised elements.

“The neatness of architecture is its seduction; it defines, excludes, limits, separates from the rest – but it also consumes.” Rem Koolhaas

Architecture in movement cannot be immediately perceived en bloc. Like all architecture, it changes as time goes by and habits form. It time it develops a « patina ». Photos (or a video) of a newly constructed building do not reflect its architecture but are simply a more elaborate representation of virtual images, a realistic sketch. Several years or even decades will have to go by before it will be possible to show a finished building at the beginning of its existence and to see how it has adapted to its surroundings, how it has fitted into the environment that existed before it came along, the role that it plays in the resulting new environment.

Images remain one of the visual representations of architecture, but only one. For architecture is not just a visual art. Nor is it just a perceptive (multi-sensory) art!

Architecture cannot be contained within a single frame but has an infinite variety of different frames, either stationary or moving in all their dimensions.

We define apprehendable space as space that is not moving in any of its dimensions, in other words:

It is difficult to create an environment that is completely neutral, for that would mean – among other things – that it would not react to the sound produced by passers-by.

A room, a white parallelepiped seen from within is not neutral but coloured by our familiarity with this simple, ancestral geometric shape. To consider it neutral would be to set arbitrary mental yardsticks.

A more complex organic or geometric landscape is no less neutral, it is simply harder and longer to apprehend. In the first instance it may have the effect of surprise and therefore cease to have that neutrality conducive to introspective meditation.

Example of a neutral space: a dome

We define a blank space as one that never changes. A space that remains invariable whatever the changes in the outside environment (sound, light, etc.).

Moving architecture is one that moves, if only in time. It changes in relation to an observer completely still in space. The changes that occur may be caused by an outside stimulus or be completely random. By way of example, a sudden breeze will alter the observer’s multi-sensory feeling or perception of a particular space.

When architecture moves as a result of an outside stimulus, it is this outside movement that prompts movement in the architecture. There is a connection between the two.

Example 4: Permutations of the above

It would also be possible to imagine movements in architecture prompted by shifting thoughts, heartbeats, gesticulations, fluttering eyelashes.

These connections may occur inside or outside the building.

The entrance to a building is a major transition area, which corresponds to a threshold to be crossed. It represents the point where the outside environment and the inside environment meet and should always be designed as such.

Towards architecture in movement that is neither « living » nor uniformly robotic …

Architecture with all its movements must not become a living thing. The goal is not to breathe life into it as though it were animal, vegetable or any other form of living species.

It is time to cease the endless quest to reproduce nature, either by adopting forms and shapes found in nature – the present biomorphist movement in particular – or in its creative processes. New forms must be found, new reactions, new movements, original structural processes. We need to work on segregating, organising, modulating and moulding the material that is « nspaces » as never before. In doing this, we must bear in mind 1/ the many fixed or moving points of overall perception in all this material; 2/ the existing organisation or context; 3/ the outside environment.

Architecture is a receptacle that contains life… that is capable of changing and adapting in response to stimuli from the outside environment (climate, flow, etc.), and to actions inside the part of « nspaces » defined by the building: movements of the players, variation in sounds (adaptation to the sources of noise, movement and stimulus within the space occupied by the building, for example the opening of a door).

Architecture is both an already existing construct and the movement in it created by outside factors: a building is therefore not just an assembly of tangible materials but also a collection of intangibles that may take the form of computer-generated data (databuilding in reference to MVRDV’s datatown). As we have explained in other writings, buildings now have new electronic hearts or cybernetic brains (Nicolas Schöffer). This addition has nothing to do with domestic robots or home automatics (the aim of which is very often to standardise all the different environments by creating buildings that all have the same intelligence, that are all the identical). Instead these new hearts or brains play a part in creating the movement we were referring to when we spoke of architecture in movement. In this era of sustainable development, they may also serve to control consumption and/or energy generation. The cybernetic brain also extends the building beyond its normal spatial boundaries into other nspaces dimensions, blurring its contours in the process.

It is in this way that architecture changes, thereby changing its own internal environment and the role it plays in the external environment, creating the effect of surprise by never being the same in time, in nspaces, from one building to another. The overall idea remains unchanged, namely that we need to break away from a world where everything has to be the same and move to one capable of making intelligent use of contemporary technologies to create architecture consistent with its time and nspaces and offering its own original and specific features, thereby distinguishing itself from all other ar(t)chitecture.

Creating architecture that weeps and bleeds (Coop Himmelblau), not because it is sad but as an original (and non-systematic) response to a stimulus, to a change in nspaces. 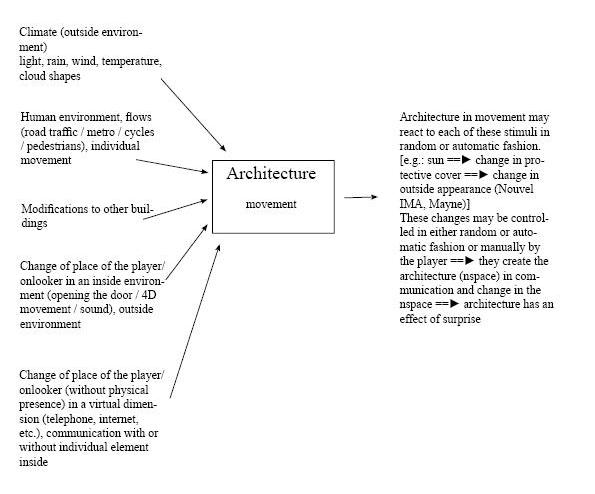 Most changes in architecture should be imperceptible. They occur very gradually and are not visible on the players’ scales of time.

Movements in architecture are subtle and slow. They are not life but a physical manifestation specific to architecture, like waves (that endlessly form and reform), geysers, waterfalls or volcanoes.

This physical manifestation may be the starting point for programmes containing random elements. Architecture will cease then just to be a stone and become a touchstone instead.